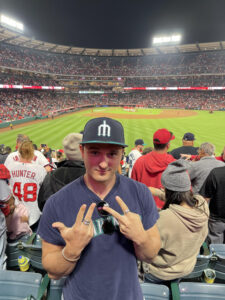 I recently set out to visit and attend a game at all 30 major league baseball stadiums in the United States. So far, I have attended games at Anaheim, Los Angeles, Miami, Oakland, Philadelphia, San Diego and Seattle. I started a year ago, so I think this is a pretty good start to my journey. I did not plan out these visits. If a game was scheduled in a city I happened to be in, I took advantage of the opportunity. Going forward, I want to be more methodical about planning my journey. That means reading up on the history of baseball, the stadiums, the teams, and of course the fans. Baseball could not exist without fans, that’s true of any sport. But in a world where sports are fast paced and limited by time, baseball has a very different feel to it. It is slow. The games are untimed. There is a seventh inning stretch. Hotdogs, beer and nachos are leisurely consumed. And as in all sports, stats are discussed and debated.

I love statistics and I really enjoy the culture, the rivalries, and the mythology behind the boys of summer. But I am new to this space. So, I thought it best to get advice. Below are words of wisdom I received from a true fan of the sport who has visited 29 out of the 30 stadiums.

Major League baseball is a marathon and not a sprint; excellence reveals itself over a long period of time.  During this time, statistics mount and tell the true story and true talent levels of team and players. The statistics are what first sparked my interest in baseball, through the backs of baseball cards and newspaper box scores. Baseball statistics are known by fans in a way that doesn’t exist in other sports. Now I like the game for the stats and for the friends I can spend a lot of time with while watching the games, which are untimed, and go at a slower pace than other sports. Lots of time for fans to think and talk. Something to take my mind off real life.

The giveaway from April 29, 1984 Mets game.  It was Strawberry Sunday, honoring Rookie of the Year from 1983, Darryl Strawberry.

HOW MANY STADIUMS HAVE YOU VISITED?

Since 1985, I have seen a game in a different city with the same group of friends. We did not make a trip in 2020 or 2021. I have been to 29 of the current 30 parks, plus over a dozen that used to be major league parks. I have not yet been to the new Texas Rangers park in Arlington.

HOW WOULD YOU RANK THE STADIUMS?

The good (in order; San Fran is far, far better than any other park.)

San Francisco: The best out there. Walkable from downtown; great view of the water; garlic fries; unique dimensions and look & feel. Team history.

Minnesota:  One of the best new stadiums. Too small, because the land they had (between the train tracks and the interstate) was tiny.  Great send of history of the team and of Minnesota baseball. Nice spot a few blocks from the heart of downtown. Great luxury suite area.

San Diego: Walkable from downtown; a historic building incorporated into the design. A beach in the outfield.

The middle of the pack (not in order)

Pittsburgh: Narrowly misses the top few parks due to concourses which are too narrow when the park is full. Right downtown; outstanding city views; local foods. Statues outside. This park makes most fans’ top 5.

Dodgers: Clean, beautiful, team history all good. Traffic to the game is a huge demerit.

St Louis: Too soon to tell. Great fans, who wear their team’s colors proudly. Terrific team museum. Neighborhood still growing in. You can see the arch, which is a plus.

Detroit: This would be a far better park if they moved it to a better neighborhood. Nice touches incorporating the Tigers logo; great view.

Atlanta: The Waffle House in the stadium really helps. The traffic does not.

Baltimore: Sparked a revolution in new parks. But it hasn’t kept up with the times.

Cleveland: Was in the top 5 when built but has been overtaken.  Now too small, but still located downtown. Very few unique features.

Kansas City:  Good incorporation of fountains in the outfield. If you like stadiums on the outskirts of cities, clustered with a football stadium…which I don’t…. this one’s for you.

Milwaukee: A dome, which opens. But still a dome. Bernie Brewer’s slide is a plus.

Anaheim: The Disney of parks. Clean, beautiful, albeit a bit sterile.

Citi Field, Mets: Nestled in the middle of a park in Queens doesn’t help.  Late to the party on incorporating team history. Concourses a bit small. Not enough bathrooms. That said, good food selections.

Philadelphia:  In the middle of a cluster of stadiums and arenas. Blah location. Improvement over their last home. Needs some uniqueness, unlikely to get it.

Seattle: While it gains points for being downtown, and for being an upgrade from the Kingdome, there is little special about this place.

Houston: Outskirts of a sketchy area of Houston.  Points for the train in the outfield. Points for the fans singing “Deep in the heart of Texas”. But nothing special.

Cincinnati:  This park defines “mid-pack”. Outdoors, downtown, and a river over the fence. But somewhat anonymous, poor incorporation of team history.

The Bad (in order; Tampa is the worst. And nothing else is close to being as bad.)

Miami: They tried; they really did. They failed. An indoor mall feel.  The dome is closed too often. On the good side, they have a bobblehead museum and a unique color scheme.

Toronto: Points for being downtown. Demerits from the seating plan of a multipurpose stadium.

Oakland: Location, age, and seats far from the field all add to an awful experience.

Tampa Bay: A mausoleum. Out of the way; a dome; fake grass; I could go on, but why?

And so now, I continue my journey a bit more informed.  Grateful for the information and prepared to make my own stadium ranking list when I finish.

There is only ONE good baseball movie, which is The Bad News Bears. (The original one, 1976.)

Other baseball movies that fans like but I don’t:

Dark horse great baseball movie:  Ferris Bueller’s Day Off (1986) — Ferris choose to go to a Cubs game on his big day. You do see the joy of the fan experience. Granted, it is a subplot.

Also noteworthy is The Natural (1984). It was a decent baseball movie, highlighted by the appearance of longtime Met fan Glenn Close, who later went on to perform a rousing (albeit fast-tempo) performance before game one of the 1986 World Series.